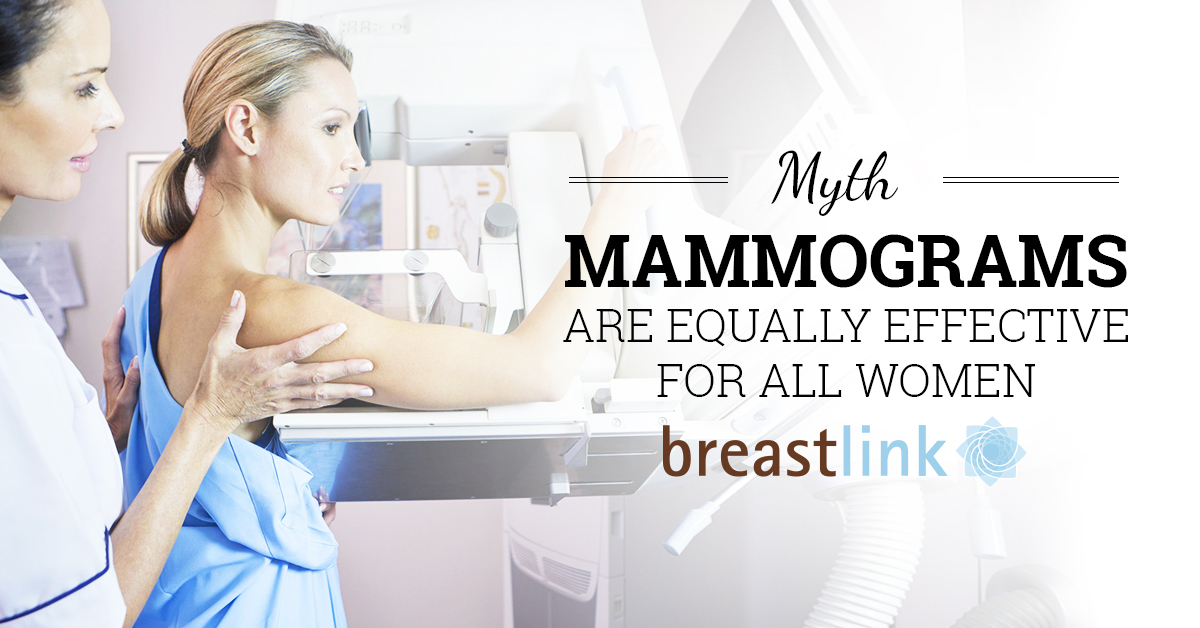 Myth: Mammograms are equally effective for all women

Myth: Mammograms are equally effective for all women.

Fact: Up to 50% of small cancers may not be visible on the screening mammogram.

Although the screening mammogram has been highly effective in terms of early detection of breast cancer, it is not without its limitations. A recently published study in the prestigious Journal of the American Medical Association (JAMA) demonstrated that screening mammography has a 47 percent cancer false negative rate in women with dense breasts. This means that up to 47% of cancers may not be seen on the mammogram. Other recent studies demonstrated that women with dense breast tissue have an increased risk of developing breast cancer, which some studies suggest to be six-times the risk for the average women.

In response to these findings, many states are requiring mammography facilities to inform women if their breasts are found to be dense on a screening mammogram. California is one of these states, and this law went into effect in April 2013.

This legislation can cause anxiety and confusion for both patients and their physicians. The following discussion will provide a summary of the key issues. The first point to make is that women with fatty breasts on mammogram—approximately 50 percent of the screened population—do not need any additional studies since the screening mammogram is very effective in detecting small cancers in this group of women.

Second, the women at very high risk such as those with multiple family members with early onset breast cancer will most likely need a yearly MRI in addition to their yearly mammogram, regardless of their breast density. In most cases, insurance will cover the cost of a yearly MRI in very high-risk women.

The major point of contention is what to do about the women in the middle, who have dense breast tissue but no family history. The choice for most of these women is likely to be a screening ultrasound (US), which has proven to be highly effective in detecting cancers not visible on mammographic screening. The alternative breast MRI is much more expensive and requires an I.V. injection of contrast material. Given the comfort, ease, and reduced cost, the ultrasound will probably be the procedure of choice for most women who desire additional screening.

The good news is that progress is being made in detecting early cancers that were previously not seen on a screening mammogram. The cancers detected by the ultrasound and MRI are typically small and have an excellent prognosis. Thus, as we expand the use of these new technologies, breast cancer survival rates will improve and the need for mastectomy and chemotherapy will decrease.