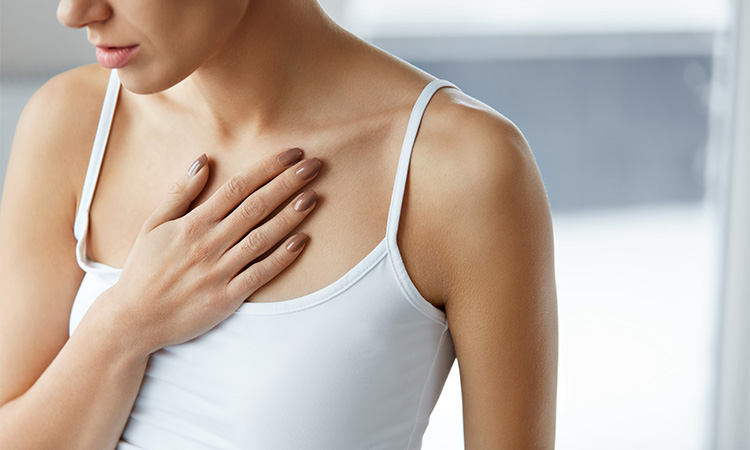 Nipple discharge can be an early symptom of breast cancer, but most cases of nipple discharge are due to benign conditions. The following are guidelines to differentiate benign discharge from discharge that is associated with malignancy:

How we approach the problem of nipple discharge.

First we do complete history and physical examination, and make sure we have an up-dated mammogram. If the examination and recent mammogram are negative, and the discharge is not-spontaneous, we reassure the patient. We suggest that she examine her bra and night clothes for spotting, and if this is observed, she should return for re-evaluation. Otherwise we suggest she be followed at routine intervals.

If the discharge is spontaneous, and is coming from a single duct, the next step is to do a ductogram. A ductogram is a procedure in which contrast material is placed into the duct (under local anesthesia) and an X-ray is taken (see link to picture). If an abnormality is seen in the duct the patient is taken directly to the operating room where the abnormal duct is removed.

We have used this approach in hundreds of patients with spontaneous single duct nipple discharge with consistently excellent results. In 90% of the cases the biopsy is benign and the discharge stops after the removal of the abnormal duct. These patients are returned to routing follow-up. The majority of cancers that are identified with this procedure are early cancers that have an excellent prognosis.

The ductoscope is a newer technology that allows the observer to look directly into the breast ducts. The procedure can be done in the office and seems to be fairly well tolerated. Its role is yet to be defined. However, since most breast cancers start in the ducts, it is exciting to have new technology that allows us to visualize the duct.

Ductal lavage is a relatively new technique that evaluates a relatively large sample of cells that are washed out (i.e. lavaged) from the ducts. We are concerned about the costs of this procedure. We have so far concluded the limited benefit is not justified by its cost.

Pictures of patients with nipple discharge and ductogram

We offer patients a variety of breast imaging, breast health services and breast cancer treatment options. Our medical experts assess each situation to determine the best course of action for each patient through multidisciplinary treatment planning.

A multidisciplinary treatment planning conference, bringing together the perspective of radiologists, pathologists, surgeons and oncologists, ensures the collective wisdom of the Breastlink team crafts the optimal breast cancer treatment plan for YOU.

The experience of our breast-dedicated medical providers has led us to believe that women are best served in a freestanding, multi-disciplinary practice dedicated to breast health. Our network of breast health centers are located in California and Arizona.