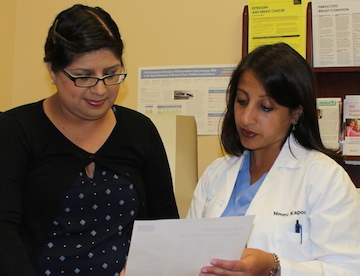 Surgery for All Thyroid Nodules? An Approach Based on Molecular Profiling

Many people — in fact, most people, — have thyroid nodules. Most nodules are benign or non-cancerous. Figuring out which nodules are cancerous can be challenging. Fortunately, there are molecular tests available that can help to sort out these challenges.

Years ago, my colleagues and I worked on research in this field and identified a molecular profile that can predict which thyroid nodules have malignant, or cancerous, potential. Now, commercial labs even make use of molecular profiling to help guide patients and physicians when deciding on surgery.

A thyroid nodule is a growth of cells that form a mass in the thyroid gland. The thyroid gland, located in the front of the neck below the Adam’s apple, produces hormones that help to regulate heart rate, blood pressure, body temperature and metabolism. Thyroid nodules occur in more than 60 percent of the U.S. population.

The incidence of thyroid nodules, or tumors, is steadily increasing due to increased detection of small, asymptomatic tumors. Thyroid tumors can be found incidentally on CT scan of the chest, ultrasound of the blood vessels in the neck, PET scan of the body and MRI of the breasts. Most of these thyroid tumors are benign, but many are surgically removed anyway to confirm that no cancer is present.

The process of evaluating a nodule begins with basic bloodwork that checks thyroid function and an ultrasound of the thyroid gland. If thyroid function is normal and a solid mass is found on ultrasound that either measures more than 1cm or has concerning features such as increased vascularity or calcifications, then a sampling of cells is performed with a fine-needle aspirate (FNA).

The cells from the FNA are prepared, stained and evaluated under a microscope by a pathologist and classified as benign, malignant, or indeterminate. Benign nodules, such as goiter and follicular adenomas, can be followed and do not need to be removed surgically. Malignant tumors like papillary carcinomas, follicular carcinomas, medullary cancer and anaplastic tumors all need to be removed surgically if feasible.

While most thyroid nodules can be definitively diagnosed as either benign or malignant, approximately 10 percent cannot be reliably classified and are described as indeterminate nodules. These are typically cellular follicular lesions. Historically, these were removed by surgical excision of the thyroid lobe with the nodule to confirm whether or not the nodule was cancerous.

Fortunately, gene profiling can be used to successfully differentiate benign from malignant thyroid tumors. Interestingly, during some of our research, we also encountered a third group of tumors that are distinct molecularly from both benign and malignant tumors.

It is sometimes impossible to predict whether thyroid nodules are cancerous by looking at the cells from an FNA under a microscope. It is more reliable to predict cancerous behavior by understanding which genes and which proteins are more or less active within cells. To first understand the behavior of benign from malignant tumors, my colleagues and I studied the gene expression profiles of 90 thyroid tumor samples.

We compared gene expression arrays of known benign tumors with that of known malignant tumors. Gene expression profiling refers to the process of measuring the activity of many genes to create a picture of cellular function. To do this, we isolated RNA from thyroid nodules and evaluated the genetic information from each tumor. We found that expression analysis of 61 genes were able to distinguish benign from malignant tumors.

This was the first step in better understanding what makes some thyroid nodules malignant and others benign. After this genetic classification was established and confirmed, we then tested a highly variable group of thyroid tumors and ultimately we found a third class of tumors, a borderline group, which classified neither with benign nor malignant tumors. Results were published in the scientific journal Cancer.

Of 15 borderline tumors that we studied, seven had been diagnosed as follicular adenomas (FA) and eight had been diagnosed as follicular variants of papillary thyroid carcinomas (FVPTC). When comparing borderline tumors with malignant and benign tumors, there were significant differences in gene expression across multiple genes.

The results of this study suggest that there is a third category of thyroid tumors that cannot be classified as benign or malignant. Of tumors that were histologically borderline, two-thirds shared few gene expressions with either benign or malignant tumors. One of the 15 histologically borderline tumors was determined to be malignant and four were determined to be benign.

Fortunately, the majority of thyroid tumors can be reliably classified as benign or malignant with a combination of FNA analysis and molecular profiling. The commercial labs that offer molecular profiling on thyroid nodules will still not predict cancer nor promise benign behavior with 100 percent certainty; however, they do give a better likelihood of what to expect.

This can help guide patients and clinicians on the best management of a thyroid nodule that falls in an indeterminate category. Furthermore, with the addition of individual gene analysis such as MET-gene mutations and BRAF mutations, prediction of malignant tumors has become much more reliable without surgical excision for confirmation.

The evaluation of thyroid nodules has improved over the past decade. Now, genetic profiling has become a reliable method to predict whether a nodule has cancerous behavior and whether surgery is going to be needed. For any thyroid nodule that is undergoing FNA analysis, if the cytology (evaluation of the cells under a microscope) is not clear-cut, then a molecular profile can be done on the cells to help guide further management.

Surgery still plays an important role for the few thyroid nodules that fall in the “borderline” category. However, this field is in constant evolution and our understanding of thyroid disease will only improve with time and research.