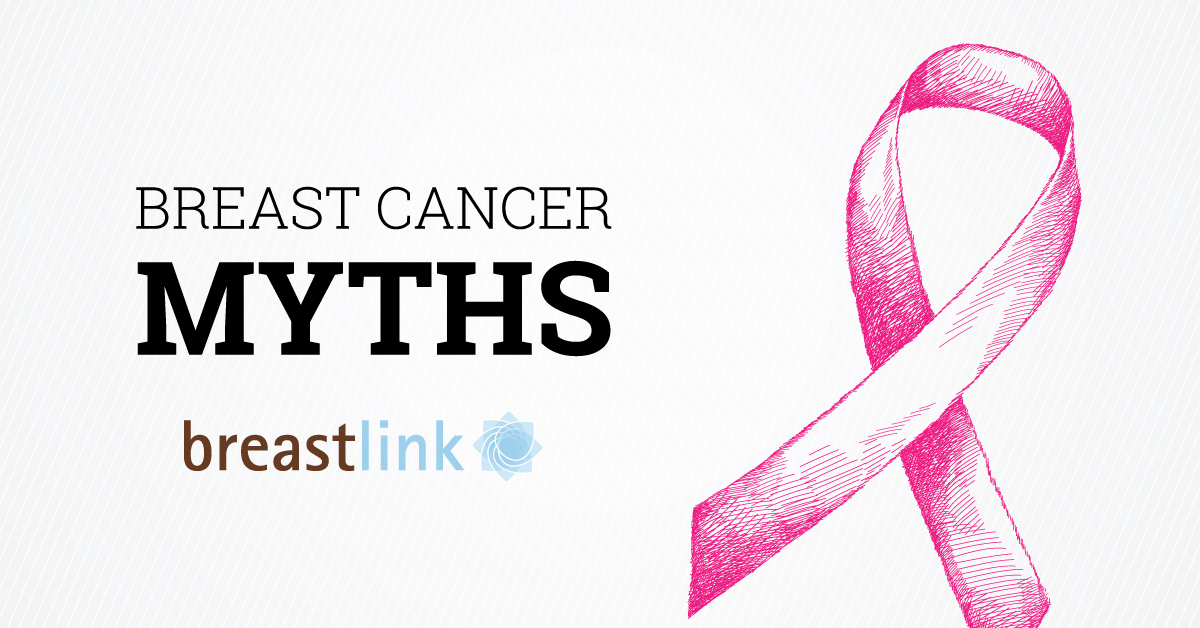 Modern technology has made it easy for women to find information about breast cancer. Unfortunately, it has also made it easier for them to be misled. Myths are often circulated and popularized online, distorting women’s understanding of breast cancer. Here are 10 common breast cancer myths and the truth about them.

This myth is based on flawed studies about two common ingredients in deodorants and antiperspirants: aluminum and parabens. Aluminum is used to block sweat glands and by doing so, some people worried it could prevent the release of toxins and potentially damagebreast tissue and estrogen receptors around the armpits. However, the body does not expel toxins through sweat glands. Toxins are processed by the liver and kidneys and expelled through urine and feces. Furthermore, deodorant contains very small amounts of aluminum and studies have shown very little of it is absorbed through the skin, significantly less than what women absorb every day through their diets.

Parabens are preservatives. They can be absorbed through the skin andare similar to estrogen. This caused concern because estrogen encourages the growth of certain types of breast cancer, but when researchers examined these parabens more closely, they found they are hundreds of times weaker than natural estrogen; too weak to affect cancer risk.

In 1995, two researchers published a book called Dressed to Kill, which claimed women who wear bras for 12 hours or more every day are more likely to develop breast cancer. They claimed the underwire constricted blood flow and the lymphatic system around the breasts,which caused a buildup of toxins. However, lymph fluid in the breast flows up towards the armpit and the breast bone, so even a tight fitting bra would not restrict its flow. Subsequent studies have also discredited Dressed to Kill. Researchers have not found any correlation between bras and breast cancer, and women who develop breast cancer rarely develop it in the areas around the underwire.

Men and women both have breast tissue, and both of them get breast cancer. Unfortunately, male breast cancer is often overlooked because men have far less breast tissue than women (about 1/100th) and develop breast cancer at much lower rates. It is estimated that around 2,500 men will be diagnosed with breast cancer this year, compared with around 315,000 women. Regardless, any man suffering from breast cancer symptoms, such as a breast lump or a change in the look for feel of the breast, should see a doctor as soon as possible. Men with a strong history of breast cancer (mother or sister diagnosed before age 40) or would have an inherited gene mutation such as BRCA1, should also receive regular screening mammograms.

Myth No. 5: Breast Cancer can only be Inherited

Myth No. 6: All Breast Lumps Are Cancer

Many women assume that if they find a lump in their breast, it means they have cancer. In fact, 80 percent of breast lumps are completely harmless. Most are either cysts –sacs of fluid caused by hormonal changes – or fibroadenomas – noncancerous growths caused by sensitivity to estrogen.Cysts and fibroadenomas are easily treated, and sometimes they disappear on their own. To be safe, women who find a lump in their breast should always have it examined, even though it is likely not life-threatening.

Myth No. 8: Breast Injuries Can Lead to Breast Cancer

Breast injuries can cause swelling, discoloration, lumps similar to breast cancer. Severe injuries might even trigger necrosis (cell death), which causes scarring. None of this increases a woman’s risk of breast cancer. Damaged breast tissue heals like tissue in any other part of the body, usually with no long-term consequences.

Women are sometimes diagnosed with breast cancer after a breast injury, but this is because the cancer was uncovered during treatment. Scar tissue is sometimes mistaken for cancer on a mammogram, leading to a false positive. It can also obscure a tumor, leading to a false negative. Women with scar tissue in their breasts should always inform their doctor before a mammogram, so the doctor can take measures to prevent mistaking a scar for something more serious.

Myth No. 9: There’s No Time for a Second Opinion

The National Breast and Cervical Cancer Early Detection Program recommends women begin treatment for breast cancer 60 days after being diagnosed. Most women start treatment after 30 days, but studies have found that waiting for the full 60 days does not affect a woman’s chance of survival. This means women have plenty of time to consult another doctor before starting treatment.

Getting a second opinion allows women to weigh their options and choose the course of treatment they feel most comfortable with. In fact, doctors normally encourage patients to explore their options as much as possible. Women who are confident in their choice of treatment typically fare better than women who rush in.

Myth No. 10: There Is No Way to Lower Breast Cancer Risk

While there is no way to eliminate the risk of breast cancer, the choices women make can help lessen the odds.  Women who exercise regularly, eat a healthy diet, stay at a healthy weight, limit alcohol consumption, and don’t smoke are significantly less likely to develop cancer over the course of their life.